For the latest events, please keep scrolling down.

Faith Leaders and Our Justice System: Navigating Our Courts

Faith Leaders and Our Justice System seeks to provide faith leaders with a greater understanding of how the courts work and an awareness of the resources to which faith leaders might direct those who seek their guidance and assistance. Topics will include availability of legal representation; problem solving courts; criminal prosecutions; landlord/tenant issues; matrimonial, custody and visitation issues; wills; guardianships; and immigration. 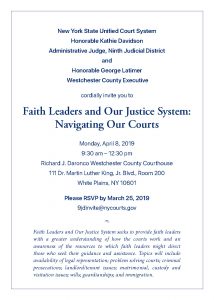 As of September 1, 2017, Rev. Dr. Alfred Johnson has been appointed Director of the Center for the Study and Practice of

As an interactive network of scholars, seminary students, clergy, and community leaders in metropolitan New York, C-SPUR is committed to producing knowledge and events that are useful and empowering to communities of faith, neighborhoods, government and private agencies. C-SPUR accomplishes this by including members of NYC communities in planning and research, to help strengthen and transform our City and empower religious communities as agents in the City. We share our findings and sponsor public events, strengthening communities of faith as agents in the City.

At C-SPUR people work together to learn about the impact of communities of faith in New York City and beyond. We conduct research to determine how churches, synagogues, mosques, temples and other religious organizations shape the City, and how changes in the City affect these institutions. The goal of C-SPUR is to help religious leaders, scholars, public officials and secular organizations understand communities of faith and the role of religion in urban life.

The Center for the Study and Practice of Urban Religion (CSPUR), is a research and action Center based at New York Theological Seminary. CSPUR is committed to producing knowledge and events that are useful and empowering to communities of faith, neighborhoods, government and private agencies.

New York Theological Seminary (NYTS) has long been recognized for its innovative programs, its pioneering spirit, and its commitment to training women and men for ministry in the real world. For more than a century NYTS has been offering theological education that is accessible, inclusive and transformative. We believe that God calls people from all walks of life and that each person has a unique ministry to fulfill. For information about NYTS visit: www.nyts.edu